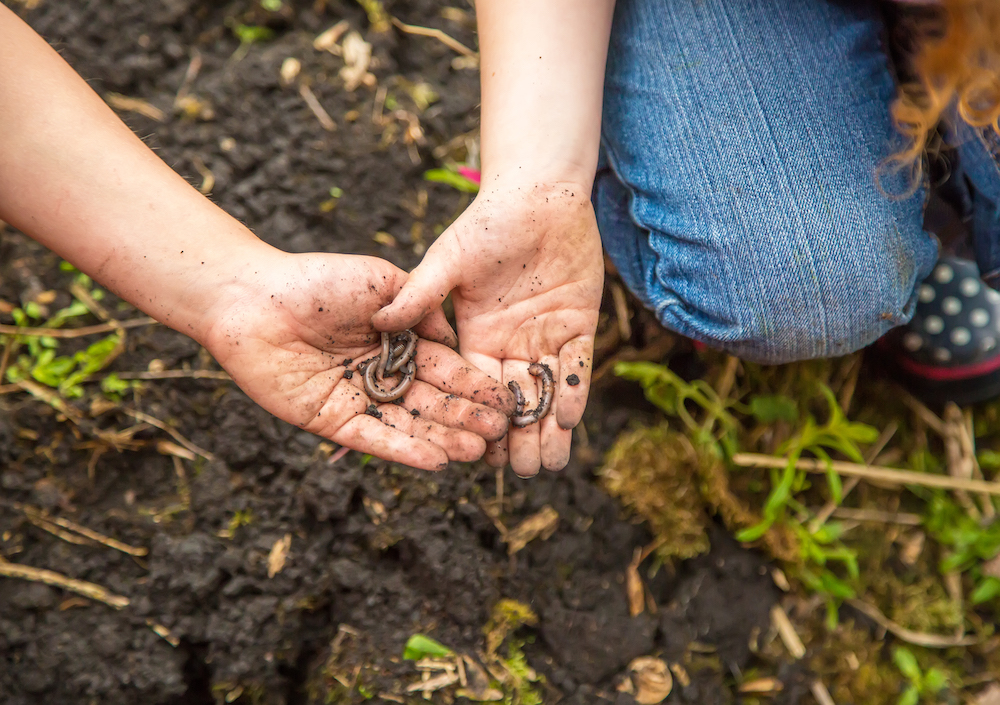 Sometimes it can be fun to be messy, which is why we are often big fans of playing in the dirt when we’re young! While digging through the garden, we often come across wiggly little friends in the soil. These are worms and they’re very important to the environment! You can see all that they do below the ground with a worm jar.

First, fill the mason jar with alternating layers of dirt, sand, mulch, and other soils. Moisten the soils so that they are slightly damp.

Next, head out into the yard and dig up some worms for your worm jar! Two or three should do. Place them on top of all the dirt in the worm jar. Add some grass and the small pieces of either carrots, celery, or apples. This will be the worms’ food to compost while they work.

Poke a few holes in the lid of the jar so the worms can breath and seal it up. Worms like to work in the dark, so wrap the jar in dark colored paper too. You can even place the jar in some place dark and cool, like a basement or cabinet. Make sure you don’t forget about it!

Over the span of a few weeks, check on your worm jar every few days to see how hard your little friends are working mixing the soil! Once you’ve seen the worms mix up all the soil, make sure to return them to your yard so they can go home!

Worms are the soil scientist of nature! They are largely responsible for keeping soil across the world (except for the desert and places where the ground is frozen) healthy for plants to grow in.

They do this by aerating (putting air into) the soil with their tunnels, which also increases water flow. Additionally, as they tunnel, they break up down organic matter for plants to use and leave behind “castings” as fertilizer. A “casting” is a fancy word for worm poop!

They move through the soil with their two sets of muscles that wrap around their bodies, allowing them to stretch and inch around. Also, they have a coat of mucus cross their body, which allows them to slide in the soil.